Posted on July 27, 2012 by Rutabaga the Mercenary Researcher

It’s my second semester at college. Annie & Karen are nudging me – they want me to notice that guy across the courtyard. They tell me he keeps looking at me and he always shows up wherever I am. They think I should talk to him because he looks like he might ‘know of some good parties’.  When you’ve been 18 for ten months and the only thing separating you from high school is about 3 months, this is what is ‘important’.

I’ve noticed him too. But I’m cautious- I’d just recently humiliated myself right before winter break, so I was still recovering from another bad choice.  I have a pattern, you see.

Can you spot the common denominator? Yes, all four of these guys, together, weigh about 350 lbs.  I have a thing for tall, painfully thin, pasty skinned guys. Cheekbones –I love cheekbones. Long fingers, interesting eyes, prominent Adam’s apple…*sigh*.  I’m especially attracted to the disturbed looking guy sitting by himself in the corner wearing black. The down side to that is that my track record has been appalling. I guess if David, Rick, Benedict or Jack had been available at the time, things might not have degenerated as they did. But they weren’t so I was in a quandary. 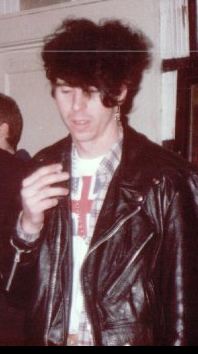 And not a button on his clothing in sight…

My heart went thump-thump, thump-thump but my brain kicked into high gear and warned me that I’d been down this foolish path before. And it boded ill – it always boded ill.  Then I remembered – he noticed me first…maybe that was the ticket.

Obviously, he knew of some good parties. He was the real deal. He was older than me (by 5 years), was far more hardcore than I could ever hope to be and I could not for the life of me figure out WHY he was interested in some 18 year old pseudo ‘intellectual’.

I remember telling him, in a coy manner, that I decided to talk to him because my friends thought he would know of some good parties. He chuckled slightly and told me that he was somewhat of a ‘hermit’.  Well, I went to this hermit’s house one Friday night for the first time. I was a little apprehensive as I had never had a boyfriend that lived anywhere other than his parent’s house. Hell, I’d never had a boyfriend that had a job and a car…so far so good.

And guess what? NINE PEOPLE dropped by.  Yes, NINE PEOPLE. But that’s how it is with Scott – people come to him.  He doesn’t ask – they just do.

And just who were some of these people? Well let’s see…

WHAT????… HIS EX-GIRLFRIEND? What was this?  I had no experience with ‘ex-girlfriends’.

My role model for relationships was my older brother.  He was a Romeo kind of person – intense relationships with trauma/drama endings. His exes would most likely claw each other’s eyes out if put in the same room. Once a girlfriend made it to “ex” – it was like they didn’t exist and he’d never had that relationship before. This was what I understood to be “normal” behavior.   I was doomed. It was hard enough to know how to ‘act’ with all these 20+ people milling around Scott’s house, but I was totally out of my element with an ex-girlfriend to contend with.

It didn’t help that Lu was incredibly self-assured and extremely cool. Ironically, her boyfriend, Michael, was taller, thinner and paler than Scott. Really, I couldn’t help but like her right then and there. We’re kindred spirits.

How she perceived me – I cannot say.  But I can’t help to think that I really impressed her a week later when Scott invited them over to drink beers.

I don’t drink – well, I can’t drink. I tried to drink. It never worked out.  That night, it still wasn’t working out – but I wanted to be like ‘the big kids’ so I chewed on a cucumber and drank two Mickey’s Big Mouths.  At some point in the evening, the beers ran out. Scott & Michael walked over to a Circle K and left me with Lu.  After what occurred, I should have probably sent her a sympathy card.

Let me reiterate – I can’t drink. I think about 10 minutes after they left the pressure to drink and ‘be cool’ (which I failed at utterly) got to me.  I ran to the bathroom (that was about 2 feet from the couch) and proceeded to completely relive my breakfast, lunch, dinner and cucumber. I spent the remainder of the evening in Scott’s bedroom trying to keep the world from spinning out of control.  I still can’t eat cucumbers. Don’t ask me why I was even eating the cucumber. Nervous stupidity.  I can’t imagine what she was thinking about me – Scott’s New Girlfriend – drunk-ass-sick after 2 beers.  Send her back to nursery school.

But meeting Lu changed me in a way that I will be forever grateful. She taught me that there is nothing wrong in being friends with your boyfriend’s ex-girlfriend.  It was incredibly maturing. I did spend some time worrying that I could never measure up to Lu- she has a HUGE personality. Nobody EVER forgets Lu. But I got past that as I grew more self-assured.  Scott never compared me to Lu and never expected me to act like her.  I completely LOVE Lu.  I was really sad when they moved across the US less than a year after Scott & I hooked up.

Lu and I liked going to parties together and watching people, well women, whispering about us. Our friendship was definitely not the norm. But like I said – it was very maturing and I met a whole SLEW of excellent people that Scott & Lu knew in New York and Tucson.

I went to Scott’s house that Friday night, and I never once looked back.

23 Responses to Are Your Hipbones Protruding? Yes? I Think I Love You ~ The Story of Scott and The Story of Lu