Posted on September 3, 2012 by Rutabaga the Mercenary Researcher

The pressure is on. I’ve been looking over my stats (no surprise to anyone that knows me and my obsessions) and I realize I have some really, really, really talented writers following my blog.  I’m hoping I can keep up the pace.

I wish I could say these stories were the result of a Gin Collins…embarrassingly, however, they were not…

I was craving toasted marshmallows one evening. I had all the key ingredients – marshmallows, gas stove and a fork.  What I was lacking was foresight. I toasted my marshmallow and completely FAILED to consider the effects of heat upon metal.  I ended up with tine-shaped blisters on my bottom lip.  Do you KNOW how embarrassing it is to explain that to people?

Would You Care for Some Cake?

I was a baker in a trendy breakfast restaurant for several years. The bakery was roomy, the kitchen not so much.  It was a decent sized rectangle with stainless steel pieces of equipment on the perimeter and a HUGE table in the center for hot foods. Basically, once you entered the kitchen area, you had the width of a wheelchair between the cold line equipment and the long metal table where the finished hot food orders waited to be picked up.  It was tight.

One busy Sunday morning, I was walking through the restaurant to deliver a 9” 3-layered chocolate sour cream cake to the wait-station for the Chocolate De Jour. As I rounded the corner I slipped and caught my ankle underneath the sandwich table (which sports a nice sharp edge) whilst simultaneously falling to my right, smashing the cake into my own face and finishing up my slapstick routine with the remainder of the cake smeared down the leg of the sandwich prep guy as I desperately tried to use his body to keep from careening into hot line.

Dead silence in the kitchen – everyone is looking at me. Initially, I’m wondering why no one is laughing – then I realize they’re not sure if the situation is comical or tragic.  Honestly, it was a bit of both.  My knee & dignity were both badly bruised but I had to laugh and break the tension.  I did get to go home early that day.

On another weekend day at my bakery job, I had just finished up a special order birthday cake. The customer had arrived a little early and I was rushing to bring it up to the front. Our bakery had a door that lead out to the parking lot, which was the fastest way to get to the front of the restaurant.  I was running with the cake and apparently the parked car I ran straight into didn’t register in my line of vision in any way, shape or form.  The front bumper caught my entire right side from hip to knee; stopping me in my tracks. Unfortunately, the cake kept moving forward.  On that day I learned to always have a backup for special orders if possible.

I was biking to work one morning at 5:30AM. The streets were semi-deserted so I biked down a street that I’d never bike on during rush hour.  A lot of the businesses were set up in a strip mall fashion, so that the parking lots all connected for much of the length of the street.

I decided to get off the narrow street and ride through the parking lots. I can’t even imagine how this must have appeared to an onlooker, but I *thought* that I was turning right into an entrance to the parking lot, but no…it was a curb. I flipped right over my handle bars.

A Day in the Life of my Bathroom

One of our toilets has a clear acrylic seat (with sea shells embedded in it). 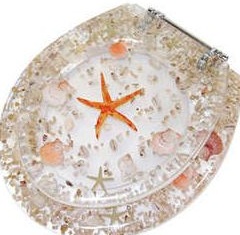 And over the toilet is a storage cabinet.  I’m not tall enough to reach the cabinet without stepping on the lid.  Can you see where this is going???

One day, I was in a hurry and needed to grab something from the cabinet above the toilet.  I had been in the swimming pool, so it was hot outside (Arizona hot) and I was wet.  I mention the heat only because I’m sure my brain was fried.

I *thought* the toilet seat was down.  So when I leaped up with my left leg (which was WET) my brain didn’t register the following facts:

But he got his karmic kickback from that laughter.   A few months later, he came in with something between his fingers…asking in an annoyed voice “What the HELL is this???”  As if I’m in charge of mysterious items found in the carpet.  Scott needs glasses to see things up close – I do not…when I looked up from my book, I could see by his expression that his eyes and brain finally registered that he was holding a piece of desiccated feline fecal matter. Just writing about it is sending me into fits of mirthful laughter and glee.

And Again – I’m the Freak in the Store

One day Scott & I were food shopping.  I had noticed a group of teenagers sporting typical Goth black attire.  I was standing at one end of the aisle with my cart and the teenagers were walking perpendicular to the aisle on the other end. I (loudly) said to Scott – Hey Look! It’s the Black People!

It took two seconds for me to realize in the MIDDLE of the aisle was an African American family…they were all staring at me. I’m sure I blanched whiter than white. I babbled incoherently that I was talking about the black-clothed kids…but they had already crossed out of everyone’s line of vision… I slunk off and left the store.  That was the pretty much the pinnacle of my humiliation.