Confessions of a Horrid Girlfriend

Posted on December 17, 2013 by Rutabaga the Mercenary Researcher

This post is for my friend, Romi – she reminded me of this story with her trip to the ballet.

When I was 17, I had a slightly younger boyfriend. He was the sweetest thing going but unfortunately, he was dumber than a box of rocks. Yup – the lights were on but nobody was home. With one exception – music. He could pick up any instrument and it would come to life under his fingertips. In that respect, he was a genius.

I spent HOURS of my life listening to him play any variety of instruments – guitar, banjo, keyboard, drums, piano, harmonica, anything laying around his house had the potential to be music. Plus he could sing  – it would make my heart absolutely melt.

He surprised me one day by saving up his very small amount of teenage income to get us tickets to a symphony. He was so excited – neither of us had ever been to a symphony before and he was bursting with happiness and pride. So excited to be taking me to experience classical music live for the first time. And then I crushed his heart.

We dressed to the nines and arrived at the concert hall. The demographic was adults 65+ and us.  We settle into our seats and the symphony commences. About 20 minutes in, it begins…ever so softly, I start to hear the sounds of deep breathing and gentle snoring…my own eyes start feeling heavy as well. I take a visual inventory and realize that most of the heads have fallen back, drool is escaping from mouth corners and every so often a ‘snort-I’m-awake’ jolt can be spied out of my peripheral vision. It was too much – I joined the sleepers.  I couldn’t help myself. The pull was too strong. I wanted to get into my bed with my pillow but I was stuck in a seat. Too old to curl up on the floor; too young to have perfected the vertical-chair-sleep that my grandparents were so good at.

Intermission – THANK GOD!  I shake myself awake, wipe the corner of my mouth and drag my boyfriend into the lobby.  Therein I proceed to do something that still shames me to this day. I convinced him that the concert was over and it was time to go home.  Sadly, it wasn’t that hard to do…it was only as we were leaving the building that he noticed that people were going BACK into the concert hall. But it was too late – I had my keys out and we kept moving forward.

When we were in my car that he looked at me with his sweet dumb stare and  asked me if it was really over or just intermission. Quite red in the face, I admitted to the ruse and confessed that I was unable to stay awake.  I could tell he was hurt – and I felt really bad. Really, really bad. Well maybe not so bad that I offered to go back in – let’s not be crazy here- but pretty bad nonetheless. Luckily with 16 year old boys, there are other things you can do to show how sorry you are without having to subject yourself to another hour of coma-inducing music.  And we’ll just leave it at that.

So there you have it – the confession of a horrid girlfriend. 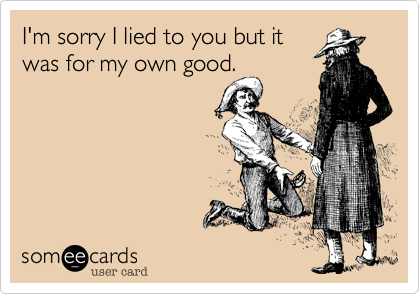 41 Responses to Confessions of a Horrid Girlfriend